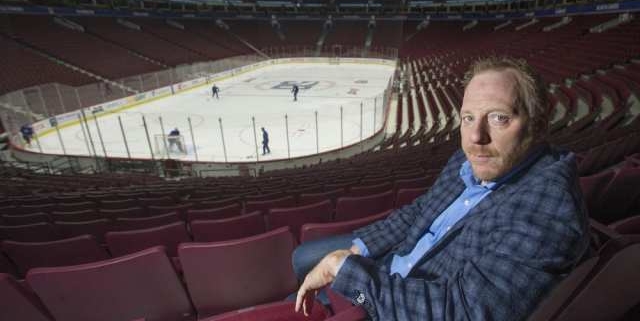 Reaching out for help may be hard, but it’s the most important thing to do when facing mental health issues, says former Canucks goalie

To former Vancouver Canucks goalie Corey Hirsch, the cut of skate blades on ice, the hammer of stick and puck, the clear, cold air of the rink is home. It is calm.

Hirsch was a rink rat who grew up on the ice, rose steadily through the ranks in Alberta, from development opportunities at the age of 12, through four seasons of major junior hockey with the Western Hockey League’s Kamloops Blazers. He was selected by the New York Rangers in the eighth round of the 1991 NHL Entry Draft, went on to nab a silver medal for Canada at the 1994 Winter Olympics in Lillehammer, Norway, and spent all or part of four seasons with the Vancouver Canucks, among other cities, in a 14-season professional career in North America and Europe.

Hirsch could always keep it together on the ice.

Until he couldn’t anymore.

Hirsch has done both. Now retired from hockey, the broadcaster with Sportsnet is an advocate for mental health who shares his own story to help others who might be struggling, hiding or driving full throttle toward the edge of a cliff, as he once did in an attempt to end the pain that knocked him harder than any puck ever did.

Hirsch remembers vividly the night everything changed. He was 21, he’d been drafted by the Rangers — he had everything he’d ever worked for. Out with friends one night, random, dark thoughts began ripping through his brain. “I was standing there talking to them and I started getting these deep, dark, repetitive thoughts. Harm thoughts, intrusive sexual thoughts.”

He got himself home, but the next morning the thoughts were still there. Hirsch didn’t know what was going on, but he did know this: He couldn’t tell anyone.

The avoidance behaviour was about survival, but it only isolated Hirsch further. Games were his salvation—the adrenaline and the focus would put his anxiety and looping thoughts on ice. But it wasn’t enough.

“Summer of ’94 I tried to break my own hand so I could leave New York and go back to Calgary, but I couldn’t do it. I was stuck in New York. I called my mom to come out to help me get up, get out, get to practice, but I didn’t know what was happening.”

When Hirsch took his mom to the Empire State Building, he told her that he wanted to jump off it.

His mother started to cry, but she didn’t know what to do.

Hirsch begged her not to say anything to the team. He was afraid to reach out to the team doctor.

“The Rangers win the Stanley Cup. I book a flight the next morning at 8 a.m. I didn’t stick around for the parade, I blew out of there.”

Back home in Calgary, Hirsch opened the phone book and picked a therapist at random. He confided his darkest thoughts to her.

“The best way I can describe it is you are driving your car down the road and you have the thought: ‘What if I swerve my car into the oncoming lane?’ Most people go, oh, that’s a stupid thought, and they go on with their day. Someone like me will analyze that thought, ruminate on it: Why would I have that thought, am I a horrible person? Does that mean I want to act on that thought?

“This lady had no idea what was going on, no idea how to diagnose me. She started trying to convince me that maybe these thoughts are real.”

Later that summer, in despair, Hirsch found himself putting the thoughts into action and driving his turbo sports car full speed toward the edge of a cliff.

What made him slam on the brakes, he says now, was “a tiny sliver of hope.”

Hirsch was a fighter. He clung tenaciously to that sliver, but it would be years before he got a proper diagnosis and understood that the torment he suffered from had a name: a form of obsessive compulsive disorder known as Pure O, which is characterized by obsessive, unwanted thoughts but without ritualistic behaviours like hand washing.

Hirsch coped by avoiding people, places and activities where his looping, dark thoughts invaded. Internally, he was crippled by shame and anxiety. Externally, on the ice, his career continued to grow. He landed with the Canucks in 1995 and was buoyed, briefly, by the prospect of a fresh start.

But during his second season with the Canucks he couldn’t hold it together anymore. The dark thoughts started overtaking him again. “I was a mess. I wasn’t sleeping, I couldn’t eat, I was losing weight.”

He pulled a trainer aside during a morning skate and blurted out that he needed help. Hirsch gives huge credit to the Canucks organization for getting him the help he needed — as soon as he asked for it. Within days he had a diagnosis of OCD, and a sense of relief.

“People with OCD are 10 times more likely to kill themselves. It’s intrusive and it can be deadly, but it’s also highly treatable,” says Hirsch, who first went public with his diagnosis in 2017.

Now he wants to tear down the stigma around mental health issues. According to the Canadian Mental Health Association, one in five Canadians will personally experience some form of mental health problem.

“There are a whole lot of reasons, for men, that stop them from reaching for help. Masculinity, the school system, the medical referral system, the stigma of medication,” says Hirsch.

For now, Hirsch is medication-free, but it has helped him in the past. “Everyone is so afraid of taking meds for mental health and, yes, we still have a lot of work to do pharmaceutically, but I wouldn’t be here without it.”

Hirsch, who has three teenagers, wants mental health to be openly discussed in the education system from elementary school. “To me it’s getting the information into the hands of our kids. I wonder now, why was that withheld from me?”

His desire to help others find their way out of the darkness became more personal and more urgent after the death of his partner, Julie, who took her own life in February 2018 at the age of 43. Julie left behind two children and a large network of loving friends and family.

“It crushed me,” says Hirsch.

“The thing about Julie I want everyone to know is that if she went out to an event everyone loved her, she was always smiling, laughing, happy and life-loving, but underneath something was going on that no one could see.”

After her death, Hirsch found out Julie had reached out to a suicide hotline. It’s another missing link he hopes to see addressed. “Suicide hotlines are needed, and confidentiality is very important, but if someone would have told me or a family member we could have rallied, but nobody knew.”

Once again Hirsch credits the Canucks, and Sportsnet, for giving him the help he needed after Julie died. “Starting with the Sedins, pretty much every player came up to me and offered me condolences, and Erik Gudbranson said if I ever needed anything they would do whatever it took.”

That is the kind of team support everyone needs, says Hirsch, and the kind he’d like to see available to anyone struggling with grief, depression or mental illness.

The term “mental illness” complicates matters because of the associated stigma, he says. “We’ve separated the mind and the body, but your brain is a physical piece of the body, like the heart or the liver. We expect everyone’s brains to function perfectly, when it’s the most complicated thing we have in our body.”

While mental illness affects all genders, men are in fact more likely to die by suicide, says Hirsch. In Canada, 75 per cent of deaths by suicide are men, and globally a man dies by suicide every minute, according to Movember.com.

Hirsch wants everyone to hear this: “There is nothing wrong with you morally or spiritually if something is misfiring in your brain. You just need to tell someone.”