You are here: Home / Blog / Uncategorized

Why is Concussion Awareness important?

Most individuals will be able to recover and resume their normal activities following a concussion if they receive proper care. One of the biggest dangers associated with a concussion is Second Impact Syndrome (SIS) which is rare but potentially fatal. SIS causes rapid and severe swelling of the brain and can occur if a person sustains a second concussion before their first one has properly healed.

Removing an athlete from play if there is any suspicion of concussion  is the number  one priority. It can also be extremely valuable to collect key symptom information from the athlete and pass that along to a medical professional to assist in their assessment.

Parents can play a huge role with a child that has a suspected concussion by being aware of the signs and symptoms and making sure their child receives the proper care if a concussion has occurred.

It’s important to help and support students who are returning to school following a concussion. Cognitive difficulties, such as learning new materials or remembering a previously learned curriculum may be challenging. Depending on the type of symptoms that the student is managing, various accommodations may be requested, such as modifications to their schedule, reduced cognitive loading, extra support or extended learning times. Developing the appropriate return to learn plan should be done in collaboration with the athlete, the family, the teachers and your medical professional.

The recovery process following a concussion and the eventual return to sport decision should follow a graduated rehabilitation strategy. This strategy continues to evolve to stay up-to-date with the latest research. All athletes should be managed by the same standards with no special allowances given for their athletic ability or the needs of the team.

After an initial rest period of 24-48 hours, the athlete can begin symptom-limited activity. The athlete should be monitored by a healthcare professional and only advance to the next step when they are free of concussion-related symptoms.

What is a concussion?

A concussion is a mild traumatic brain injury that can occur after an impact that causes the head and brain to move quickly back and forth. These impacts can either be bumps or blows to head, whiplash type injuries or hits to the body. A concussion can often occur without a loss of consciousness, in fact in a recent study 90% of individuals with concussion did not lose consciousness. They can result in a temporary disruption of normal brain function and affect your memory, judgment, reflexes, speech, balance and coordination. Even though a single concussion can be described as a mild brain injury, a second concussion soon after the first one can have devastating effects.

What are the signs & symptoms?

The signs and symptoms of a concussion will vary from person-to-person and may not show up for hours, days or weeks. These signs are important to look for, but a person may also simply report that they do not feel well after suffering a concussion . Observe the athlete suspected of being concussed for any of the following signs or symptoms.

How To Recognize Anxiety in Yourself and Others

Often Times people wonder where does Anxiety and depression come from or how to identify signs that someones mental health is suffering. Check out the infographic below to help identify signs you might recognize in yourself or others and get the help they need. 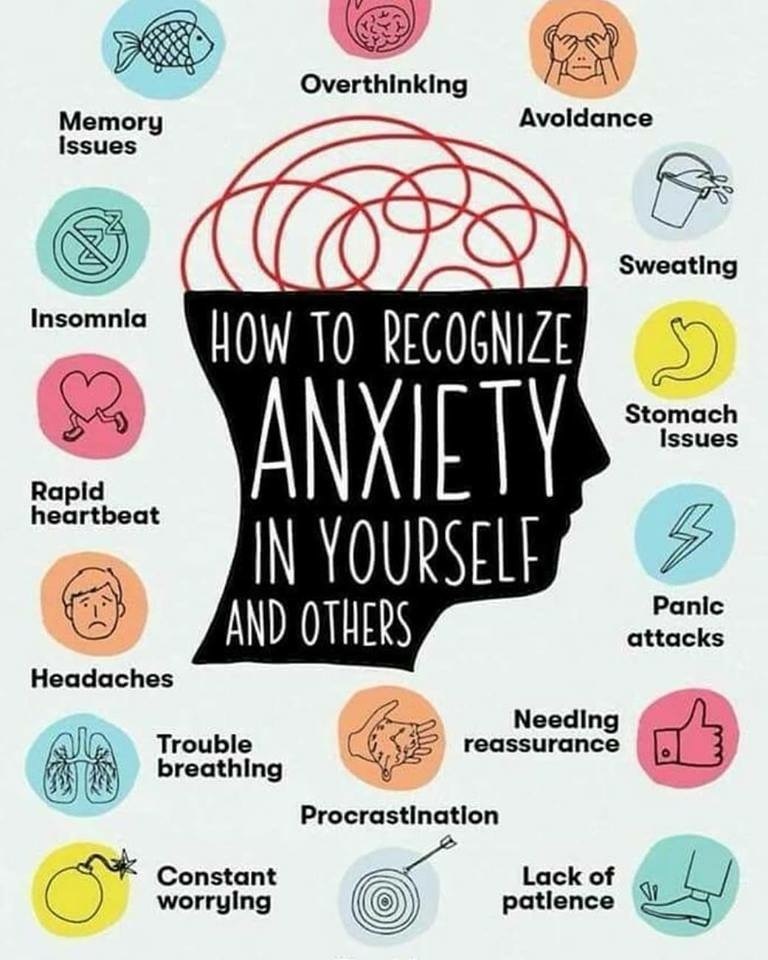 In October 2015 my life was changed forever: my mom was diagnosed with Alzheimer’s disease at the age of 56. Her fate was sealed as there is no cure to the debilitating disease that robs you of your mind and shaves years off of your life. At 16 years old I was told my mom wouldn’t know who I am by my 21st birthday, at best. She wouldn’t see me finish junior Hockey, graduate university, or get married. At the time I didn’t realize how much this news and her eventual missing presence in my life would impact me, however as 4 years have passed I’ve come to live and thrive with the unfortunate reality.

For the subsequent year after her diagnosis I slipped into a dark place and battled with depression and crippling anxiety. I knew I had a fantastic mom but I didn’t realize how much she impacted me as a person and the amount of love and joy she brought me until it was gone.

The saying you “don’t count the days, make the days count” became especially relevant to me as I couldn’t change my mom’s fate, but I could change how I chose to spend the days I had left with her. I redirected my mind and energy into the things I loved, such as my family, friends, school and Hockey. Just as every parents wants for their kid and as I’m sure my mom would want, I chose to become a better son by learning to appreciate my family, a better friend by focusing on creating memories and spending time with my friends, and a better student and athlete by dedicating my time and putting in the necessary work. Being around the people I love and doing the activities I’m passionate about truly brought me out of the mental rut I was in and gave me hope for a happy life.

It is still difficult to see my mom struggle but I’ve learned that it’s okay and necessary to mourn and express emotion. But I am also proud to say that I now know how to cope with sadness and that life always gets better.

UPON COMING TO UNIVERSITY, I THOUGHT THAT ALL OF MY
CURRENT ISSUES WERE GOING TO DISAPPEAR.

Looking back now, I know that mental health has always been a factor in my life, but I
was just choosing to ignore it. Looking back now, I know that my journey with mental
health began around the eighth grade, but I decided to deny it. Being the straight A
student that I was, alongside facing both academic and social pressures, I refused to
accept what I thought was the ‘weaker’ side of me. I was obsessed with having everyone
perceive me as being the perfect student, perfect friend, and everything else in between.
As long as other people considered me to be perfect, I thought that I would be okay.
Unfortunately, however, one can only silence their mental health for so long, until they
are forced to listen, when the act of ignorance is overwritten.
Upon coming to university, I thought that any barriers I had previously faced were
magically going to disappear. I thought that by moving across the country, I would
be able to have a fresh start; repair whatever had been broken in the past. But,
unfortunately, mental health is not something that gets left behind, no matter how
hard one may try. Mental health cannot be ignored; If silenced, it will roar louder
than you could have ever imagined.
It was just over a month into university for me, until the repercussions of silencing
my mental health hit harder than I could have possibly prepared for. Suddenly,
those pressures that I avidly veered away from in high school, were coming at me
will full force. In fact, they were coming at me faster than I could outrun, and I
suddenly found myself in awoken in a hospital bed by my mom, all because I refused
to listen to the blatant abnormalities occurring within my thoughts and actions.
The initial diagnosis was major depressive disorder, of which they treated with
intense Cognitive Behavioral Therapy (CBT), and the beginning of an anti-
depressant game of trial and error.
In what seemed almost instantaneous, my mental health went from being self-
defecating to manic. I was convinced that because I felt happy for the first time in
what seemed like an eternity, this world was my oyster. Unfortunately, when this

2
manic state is disturbed, a whole other beast is unleashed; the next chapter in my
story of mental health, had be written faster than I could process.
This chapter, was called Bipolar II disorder.
After countless trial and errors with medication, I have finally come across one that
seems to be stabilizing my mood better than any other ones before. The journey to
finding the appropriate medications, however, have only been one step to recovery.
I also meet with a psychiatrist bi-weekly, have two different doctors that monitor
me regularly, and have and will continue to take CBT workshops to understand my
disorder and how-to identify and manage my irregular moods.
Looking back now, I know that mental health has always been a factor in my life, but I
was just choosing to ignore it. I only began listening and respecting my mental health,
when it no longer allowed me to ignore it. I now know that mental health is nothing to
be ashamed of; Rather, mental health is something that needs to be honored. Mental
health is a part of you to take pride in. I denied my mental health, because I was
ashamed and apprehensive as to what others might think; that others would no longer
perceive me as being perfect. But, completely contrary to this delusion, accepting and
managing my mental health was the bravest, most exceptional thing I could have done.
When I accepted my mental health, everyone immediately accepted me. My doctors, my
psychiatrist, my family, friends, but most importantly, myself. After reaching out to my
loved ones, the support and encouragement I received was truly something more
powerful than I can put into words. Alongside accepting the support of my loved ones,
the combination of appropriate medications and therapy have truly changed my life.
They gave me a reason to honor, respect, and value my life again. Taking action and
care of my mental health gave me a reason to be excited about the future again. It
liberated me from the darkness I was refusing to come out of.
My story has by no means come to an end, but it did teach me that mental health is
something to take seriously and not to set aside. No matter how severe or minor you
perceive it to be, it NEEDS to be acknowledged. Do not ignore it, because it is
powerful enough to force you to listen, and it deserves to be heard. Reach out to
loved ones, mental health hot-lines, school supports, community resources, or your
doctor immediately. HONOR your brain chemistry and take pride in your mental
health, because by listening to the signs that your mental health is offering, you are
un-silencing a voice that deserves to be heard.